Large parts of London are made from loess. London grew in the 19th Century; thousands of houses were built with loess bricks- bricks made from the London Basin brickearth. London was well placed with respect to bricks; it could become the great brick-built city. The thousands of houses were all heated by open coal fires which produced vast amounts of ash and cinders- which was collected by 'dust-men' and concentrated into vast dust heaps. This could be sent by sailing barges to the downstream brickworks to be used in the making of the classic Thames 'stock' bricks. 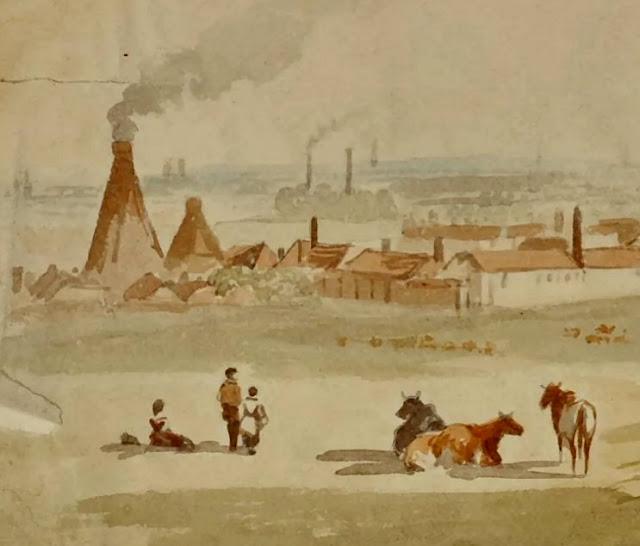 Artist: Edward Henry Dixon 1822-1884.  The cows are grazing near Randall's Tile Yard, York Way (near Kings Cross) London. The triangular structures on the left are tile kilns, a typical tile kiln could be 70 feet high. They can be seen again in the drawing of the Somers Town dust heap (below), and in the York Way panorama.
The brickearth was universal in the Thames valley and there were brick and tile works all over London. Certain brick related locations have become well known via references in diaries and novels and other writings, and by representations by a range of artists. The most famous region is probably that at Battle Bridge, near the current Kings Cross Station, close to the old Smallpox Hospital (which appears in several E.H.Dixon pictures); close to Somers Town, at the southern end of York Way. 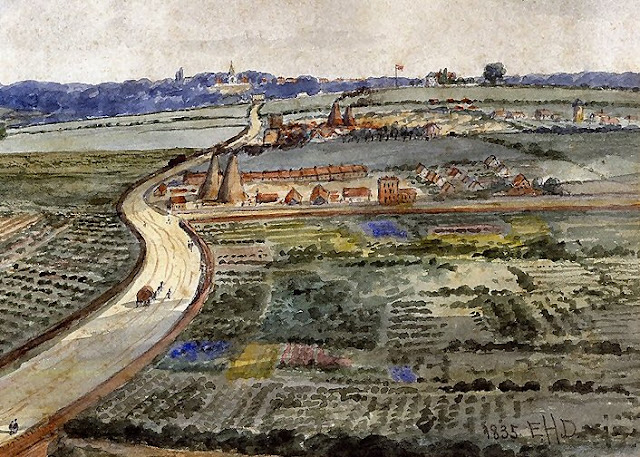 Signed EHD 1835. That is York Way; just off the bottom of the picture is the Regents Park Canal.
Charles Dickens last full length novel, Our Mutual Friend 1865, features a dust heap- the novel is based on the article 'Dust; or ugliness redeemed' by R.H.Horne 1850, which appeared in the journal Household Words (published by Dickens). The site of the Smallpox Hospital is now occupied by St.Pancras Station, adjacent to the British Library and Kings Cross Station and the Francis Crick Institute.  Nicodemus Boffin, the most agreeable character in Our Mutual Friend, lived near the great dust heap at Battle Bridge. 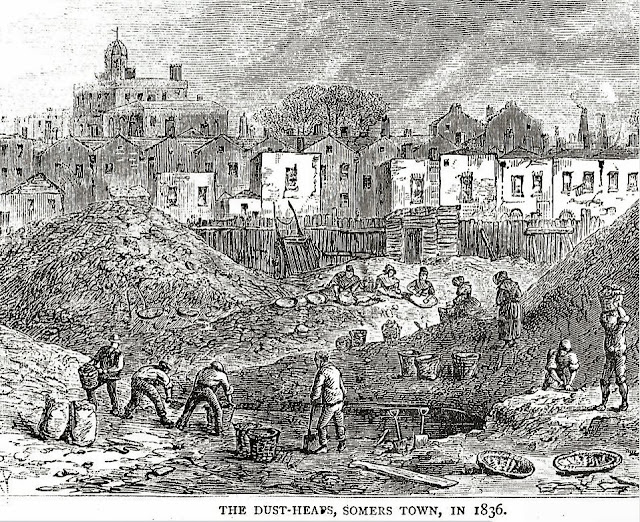 The building with the small dome is the Smallpox Hospital. This is the Great Dust Heap at Somers Town; this is the dust heap that was sold to Russia in 1848 for £40 000 to assist in the rebuilding of Moscow. Top right can be seen tileyard structures; local brick materials being produced. 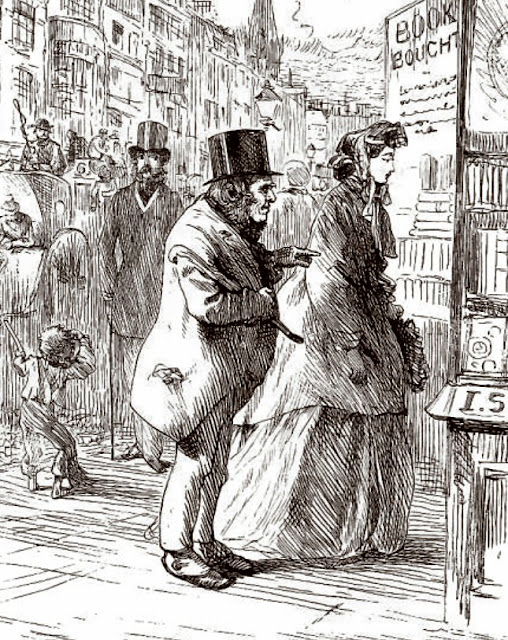 This is Mr Boffin, his fortune is based on dust, his passion is for books. "Where I live, said Mr Boffin, is called The Bower.. up Maiden Lane, Battle Bridge, ask for Harmony Jail, and you'll be put right.."
Wegg looked into an enclosed space where certain tall dark mounds rose against the sky..." 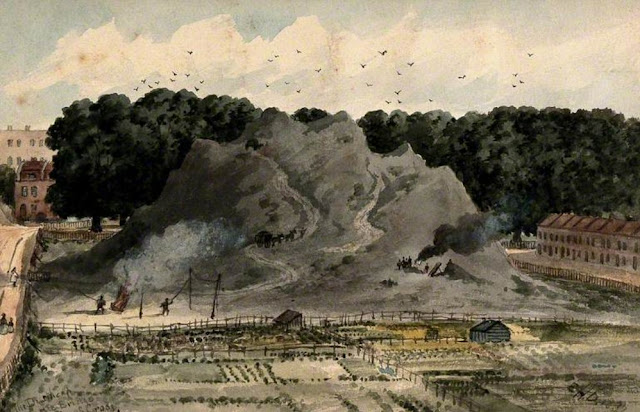 E.H.Dixon 1837 appears to have produced two versions of this picture- of the great dust heap. This is the 'dark' version. Note the cloud of dust being raised by carpet beating. The other version, the 'light' version is reproduced in the previous blog. These dust heaps provided subsistence for a whole variety of people, who sorted the mixed materials into various useful sub-classes. R.H.Horne 1850 wrote of..
"..  the next sort of cinders, called the breeze because it is left after the wind has blown the finer cinders through an upright sieve, is sold to the brickmakers. "
For an excellent discussion of dust heaps and the story of the dust heap being sold to Russia see:
Cox,A., Hounsell, P., Kempsey,S., Kennett,D.H., Worthy, S. 2017.  London's dust mountains and bricks to rebuild Moscow after 1812.  British Brick Society Information 137, 9-34.