Once every year (more or less) the Windy Day meeting is held- usually at a university in Middle England. The topics discussed relate to aeolian sediments and aeolian geomorphology. Its a one day meeting and very informal. Here is some history in the form of a list of meetings:

4 meetings at Northampton, 3 at Loughborough and Oxford, 2 at UCL and Sheffield. Delegates were able to observe the evolution of Nene College as it became University College Northampton and then the University of Northampton.  The Luton meeting took place just before Luton University disappeared. WD just survived the Covid 19 pandemic; its future is under consideration.. there will be a meeting in 2023: Friday 19th May 2023 at the School of Geography and the Environment, University of Oxford.

A new review shows the extent and nature of the UK and Irish loess; this note is designed to complement that excellent compiliation- it concerns the loess in south east Essex

C.Bunce, T.Stevens, I.Smalley, A.Assadi-Langroudi  2022   Loess in Britain and Ireland; formation, modification and environmentsl significance, a review in memory of John Catt 1937-2017.  Proceedings of the Geologists Association

The loess is concentrated in the south-east of the county, near to Southend on Sea. The Greater Essex Mineral Resource map shows the location with reasonable precision. 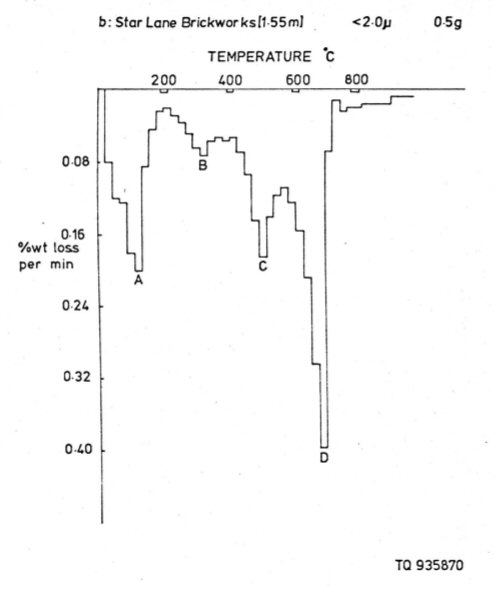 Grenville Lill managed to obtain brickearth samples from the Star Lane and Cherry Orchard Lane brickworks. These were possibly the last two brickearth producers in Essex. As far as we know the only substantial TG analysis on London Brickearth was carried out on these samples.

LL65: Notes for a History of INQUA

The history of INQUA which was presented in LL65 (April 2011) can be accessed in two places: on the official INQUA website- the LL history has become the official history- go to www.inqua.org>about>history, nicely laid out but lacking pictures. If you want the pictures of the logos etc go to the Michigan State University presentation of the whole collection of LL and call up LL65: loessletter.msu.edu. If you have access to an original hardcopy of LL65 preserve it- no doubt it will become a bibliographical treasure.
Posted by Ian Smalley at 02:59 No comments:

The P.D.Tilley map of the loess in southeast England

Colin Bunce has produced a new version of the map which P.D.Tilley presented at the 1961 INQUA meeting in Poland. Tilley participated in the Loess Symposium organised by Julius Fink. The new map supplements the new paper on the loess in Britain and Ireland by Bunce et al (2022). in Proc.Geol.Assoc- available online- should appear in hard copy in the October issue of PGA. 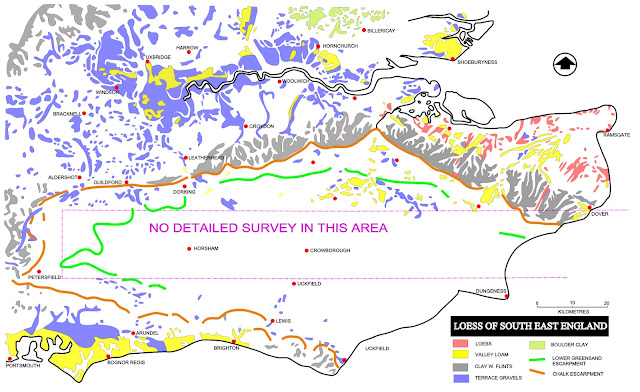 Ian Lindsay Freeman, b.1927, probably in Dundee; joined the Building Research Station in Garston, Watford in 1962; retired in 1980s.

This is the hypothesis: That the ILF paper on the mineralogy of ten British brick clays, published in the Clay Minerals Bulletin in 1964, is the best available listing of the mineralogy of British brick making materials. No other readily available source of mineralogical data is apparent. ILF sample 63AH gives an analysis of a London Stock Brick mixture- one of the very few to give any information on this important source of bricks; bricks made from the loess of south-east England.

The interest in the work of ILF arises because of the connection to the 'Loess in Britain' project. Acknowledgements for assistance go to: Dave Morgan, the Mineralogical Society, Monica Smalley. Picture from the BRE publication Building Magazine 11 June 1971 pp.69-70 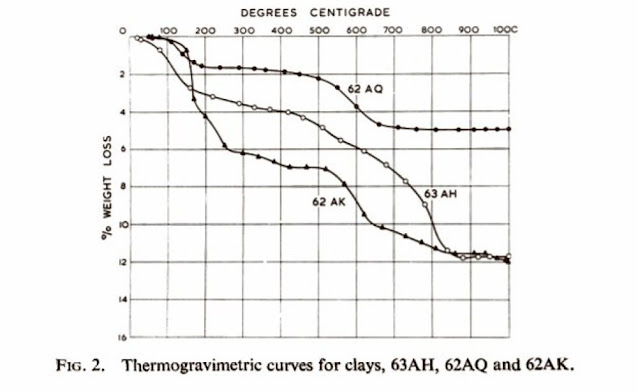 In the late 1880s John Hardcastle invented loess stratigraphy and initiated the study of scientific palaeoclimatology. He did this in Timaru, in South Canterbury, in the South Island of New Zealand. Harcastle was in his thirties when he made his critical observations on the loess deposits of the Dashing Rock section on the coast at Timaru; he is seen as a New Zealander, making his discoveries in New Zealand, but he was born in, and spent a few years living in, England.
1858: the ship Maori leaves Gravesend, in Kent, and travels to Lyttelton in the South Island of New Zealand. The Maori sailed on 23 March 1858 and arrived in NZ on 14 July 1858. On board were the Hardcastle family:
Thomas Hardcastle, aged 40, labourer and mechanic; his wife Caroline 33, and children John 10, Thomas, Elizabeth, Cresser, Caroline, Edward and Charles.
It was an assisted passage, the family received some financial support from an immigration promoting association. 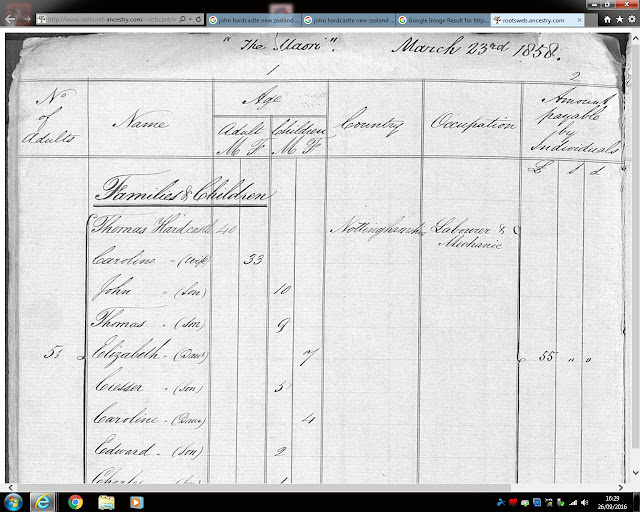 1851: there should be some trace of JH in the 1851 census. This requires more searching. There is an entry for John Hardcastle b. about 1847 in Heath, Yorkshire and listed as living at Allington in Nottinghamshire in 1851. JH would be the only child to be listed by the UK census; he was captured by the 1851 census; by the time of the next (1861) census the family were living in NZ.
1846: birth certificate. JH may have been born on 1 Sept.1846 at Beverley in East Riding of Yorkshire. That would make him 10 when he left on the Maori- which agrees with the data on the passenger list. A dating problem; some other sources give 21 January 1847 as birth date, and the birth location as Heath, Wakefield, Yorkshire, England. JHs parents- Thomas and Caroline were married in Beverley in June 1846. Timaru District Council lists his birthdate as 21 January 1847; the marriage date probably makes the January date more likely.
Three documents to start the search for the junior John Hardcastle. Travelling with John on the Maori was his younger brother Cresser. Now Cresser could be a person of interest due to his very unusual name; Cresser is a good marker- and where Cresser is John should be also. And why Cresser?  the Hardcastle male names are straightforward names like Thomas, John, Edward and Charles- where did Cresser come from?  The mother of JH and Cresser was Caroline, and her maiden name was Hebb. Another distinctive name which may help in the great search for details of JH in UK.
Some details: Cresser Hardcastle b.Newark?, Lincolnshire, England in 1852; d. Timaru 1928
Important book: The Roots of the Hardcastles; an Old Yorkshire Family, by Michael Ronald Hardcastle. [TROTH] The chapter about the Hardcastles moving to Australia and New Zealand- particularly useful. The emigration list in TROTH omits Thomas- this was presumably a simple typo. 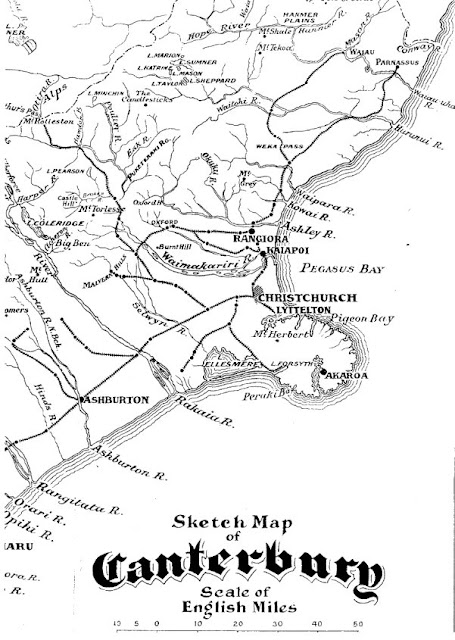 Travels in a Golden Age 2006-2020: From the Marsigli loess conference at Novi Sad in 2006 to the onset of the Covid-19 pandemic. Recent history. A tribute to KOHD

Its an arbitrary Golden Age- a Golden Age of Loess Scholarship and Loess Investigation. A very subjective view of developments in East-Central Europe and the Danubian Region and a record of events offered as Recent History. Following James Boswell and not letting important events slide unrecorded into obscurity. Its a developmental blog and will appear in bits and pieces [please feel free to add any observations or comments or thoughts or musings].

After the great LoessFest in 1999 Loess activity slowly accelerated in East-Central Europe and launched into glorious splendour at the Marsigli Loess Conference in Novi Sad in 2006- which was beautifully recorded in Quaternary International no. 198  [a nod here to Norm Catto, editor of QI who was a key contributor to this particular Golden Age].

In outline here is the pattern of the Golden Age:

Details will be added in an arbitrary and random fashion [input is needed- this is to be a cooperative history].  To see the Golden Age swelling into being have a look at Google Scholar and examine the publication records of major players- see the great upsurge in creative activity. 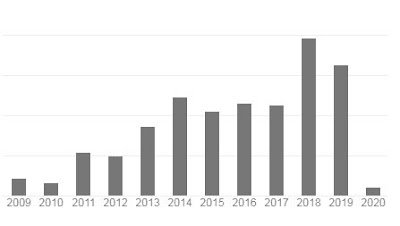 The top one is Slobodan Markovic and the lower one is Tom Stevens; the great peak at 2018 is indicative of the Golden Age; the TS result shows the surge beginning in 2006-our chosen arbitrary start date.

2006 The Marsigli conference at UNS Novi Sad; a grand beginning- ice breaker 28.09.06. Dinner at the Petrovaradin Fortress 30.09.06. A two day field trip to Titel; reception at Indjija- the town supports the Stari Slankamen loess section which may eventually become a tourist site, a location for the Loessland Museum.

2011 Loess Seminar in Wroclaw. The associated QI issue was QI 296: Closing the Gap- North Carpathian Loess traverse in the Eurasian loess belt: 6th Loess Seminar Wroclaw Poland: dedicated to Prof.Henryk Maruszczak. "Between the mountains and the ice". Quaternary International 296  16 May 2013  ed.by Zdzislaw Jary, Norm Catto, Ian Smalley, L.Zoeller, Slobodan Markovic.  The field trip was to the east and the party stopped in a quarry in Ukraine, and observed sand martins nesting in the loess banks. This inspired a series of papers relating bird nesting and loess deposits- and some discussion of the 'Heneberg Compromise', 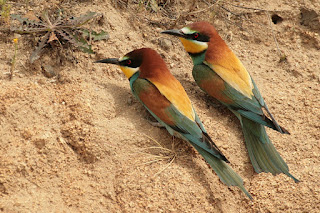 In 2011 LL produced a history of INQUA; this was published as LL65 in April 2011 and is reproduced on the INQUA website, it became the main history of INQUA.  A more detailed history should be produced while INQUA pioneers are still available. 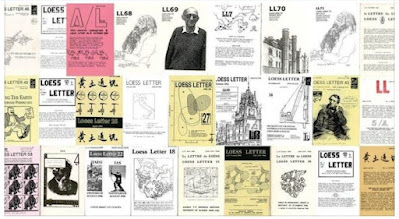 2012 was the year that the Loess Blog began (Loessground.Blogspot.com) ; electronic communication was taking over from traditional forms. It was at the ED@80 meeting that Randall Schaetzl proposed putting Loess Letter on-line (and this has now been accomplished- loessletter.msu.edu). All 71 issues of Loess Letter are now available online.  The field trip went east to see mammoth remains and Roman settlements.

2013 Leicester Loess. In 2013 the INQUA Loess Focus Group moved its annual discussion meeting away from Central Europe- to Leicester in the English Midlands- to the University of Leicester. The associated issue of Quaternary International was QI 372: Loess & Dust: Contributions in honour of Ian Smalley; ed. Slobodan Markovic, Ken O'Hara-Dhand,  Sue McLaren. Quaternary International 372 22June 2015. A field trip to look at the very modest loess in Essex.

2017 GeoTrends 2 in Wroclaw; 2nd International Conference on Geoheritage & Geotourism; reception at the Meteorological Institute- where is the corkscrew? Guests in the excellent Hostel Figa; papers in the Historical Centre. 22.09.17 Field trip to the south west, near the border with Czechia; magnificent accommodation in the Hotel Sonata. 24 Dobra; forest field trip + mushrooms. Papers> Open Geosciences. 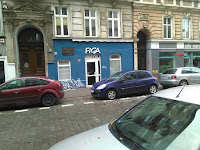 2019 XX INQUA in Dublin.  Discussions on loess; the dustcloud of the Golden Age is dispersed as Covid envelops the World. 'The golden dust of Slankamen'.

Ulrich Hambach citations in the Golden Age
Posted by Ian Smalley at 02:48 No comments: